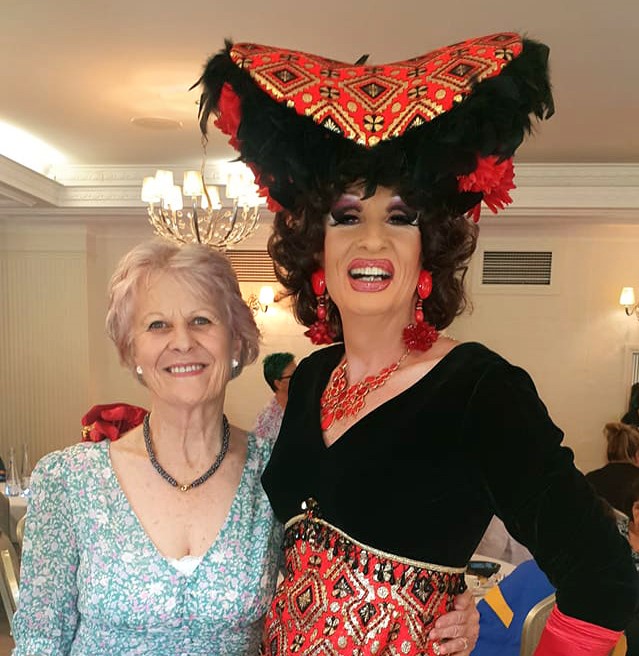 Glenn Watson/Miranda Fair My Other Life

A mild-mannered reporter, Clark Kent, would nip into the nearest ‘phone box (which, uncannily, was always vacant) and emerge seconds later as Superman.

I always wondered what happened to his street clothes! I digress! When Glenn Watson slips into an entertainment venue’s dressing room, she emerges as Drag Queen extraordinaire, Miranda Fair!

Miranda Fair? “I grew up in the Sutherland Shire and was born in 1964, the same year the huge shopping centre, Miranda Fair, opened,” laughed Glenn. “I just thought it was a catchy name for me to use on stage when I began performing as a drag queen.” And a queen this multi-talented artist be!

Her wonderful career kicked off in 1994 at the iconic Albury Hotel in Paddington when she appeared on stage for the first time in the regular Saturday afternoon Polly’s Follies talent session. “I mimed to Shirley Bassey’s Gold Finger and followed up with Edith Piaf’s ‘Non, je ne regrette rien’ and thankfully the audience loved it and I was hooked on performing,” Miranda said.

Miranda Fair is a doyen of the Drag Queen performing arts set due to her stage presence, colourful and inspirational costumes and her superb singing – those miming days are long gone!

She and her partner of 13 years, Greg Devine, were founders of the Gay Nomads group which, just like the artists in Priscilla, Queen of the Desert, travel far and wide performing their Drag Queen Shows.

Miranda’s incomparable and quirky skills in makeup, millinery and dressmaking are unrivalled on the Drag Queen scene. Twice she entered the Best Man Costume at the Sydney Gay Mardi Gras and both times she was awarded the top prize!

Miranda and Glenn are a sort of double act.

Miranda has wowed audiences all over the country and is always the star factor at iconic festivals such as Broken Hill’s Broken Heel Festival, Daylesford’s Chill Out and Lismore’s huge New Year’s Eve cabaret, Tropical Fruits.

Glenn on the other hand, has been lead singer for the popular The Blue Mabels band where, behind the mike, he belted out blues, rock and pop. He parted ways with the Mabels in 2019 and now performs regular jazz gigs along with a changing line-up of supporting musicians. Both alter-egos however have a passion for jazz.

“I love singing jazz because there is tremendous variety in it – jazz can express many different emotions, from pain to sheer joy,” said Miranda/Glenn. Glenn is a busy man, mixing performing with using his computer skills operating his highly successful business, cyberdog design.

Miranda stays at home in Berambing four or five days a week with Greg, a talented gardener, while Glenn chuffs off to Summer Hill to take cyberdog design for a walk.

Miranda/Glenn and Greg are recent additions to the Kurrajong Heights Bowling Club membership list and they have thrown themselves into ensuring the old club continues to prosper. Miranda now features on Miranda’s Monthly Drag Trivia and dinner on the first Friday of the month and on the third Friday of each month, the thoroughly entertaining Miranda’s Melodies Karaoke night.

“We love what the members are doing here and I’m delighted to lend a helping hand with the entertainment,” Miranda said.

“The hard-working committee, indeed, the entire membership, are all pulling in the right direction to make this a successful venue for all ages.” The club has regular Tuesday lawn bowls on the newly refurbished green and there’s pizza a-plenty as sending down those bowls builds an appetite.

Because your writer has encountered a variety of responses when previously asking gay friends about the reaction of loved ones when he or she ‘came out’, I posed the question to Glenn.

“I was still living at home in 1986 and was 22 when I made the decision to finally tell mum and dad,” Glenn said. “Of course, I was stricken with the thought they would disown me and throw me out of our home and their lives.

“But they told me I was their son and they loved me – ever since, those words have been the core of my happiness and well-being.”