A new two-lane bridge across the Hawkesbury River and a bypass of Richmond and North Richmond, are part of $500 million of works announced this morning by Prime Minister Scott Morrison and Premier Gladys Berejiklian.

The government’s preferred route [see images below] sees a second, higher bridge built north of the existing Richmond bridge. A new roadway will bypass Richmond to the south, connecting from Old Kurrajong Road to the Driftway.

“This critical infrastructure will alleviate the long-term bottleneck between Richmond and North Richmond created from the existing Richmond Bridge operating at capacity during peak hour, helping make the commute to and from work significantly easier,” he said.

“The new bridge will provide a new connection for road users between Bells Line of Road and the main road network, while the existing Richmond Bridge will continue to provide a vital link between Richmond and North Richmond,” Mr Constance said.

“Recent intersection upgrades at Kurrajong and Old Kurrajong roads and Grose Vale and Bells Line of Road are already improving traffic in the area, alongside current works at the intersection of March and Bosworth streets.”

Bridge is a “win for the Hawkesbury community”

Federal Macquarie MP, Susan Templeman, has welcomed the news saying it’s good to see “after a one-in-50 flood event, the Federal Government has now shifted into gear and acknowledged what locals know – that the bridge needs to be higher and bypass our town centres.”

“The feedback I provided to Government based on a survey of thousands of people was that residents wanted three things – a traffic solution, a flood-resilient option and a bypass of both North Richmond and historic Richmond,” Ms Templeman said.

“Of course, big questions still remain about what this will mean for development across the river, for people affected by the new roads on the Richmond side of the bridge, and for people whose land is to be acquired.

“NSW Transport and Roads Minister, Andrew Constance, has said there are 21 partial or full property acquisitions involved in this process, and I know residents will be extremely anxious about what that involves and how they will be treated.

“My requests to both the State and Federal Governments for briefings to date have been refused, but I do hope that I will now be allowed to engage in the next part of the process to finalise the route.

“Make no mistake; this latest announcement is the result of years of lobbying by members of the community and myself. I went to the 2010 election with a $2 million commitment to kick off this project, and the then-Labor government delivered on that funding for the people of the Hawkesbury.”

Today’s announcement of a $200 million funding boost from the Commonwealth and $50 million in the upcoming 2021-22 NSW Budget, brings the total value of works to $500 million.

State Member for Hawkesbury Robyn Preston is inviting the community to have its say on how construction progresses.

“We want the local community and road users to have their say on the preferred option for a new Richmond Bridge and associated traffic upgrades, which are designed to keep vehicles moving in what has been a heavily congested area of the road network,” Ms Preston said.

“By 2026 it is estimated the new bypass road and two-lane bridge will save motorists up to 12 minutes’ travel time through this area.”

Face-to-face community information sessions will be held on Wednesday, 16 June, 5-7pm, and on Saturday, 19 June, 10am to 12pm, at the North Richmond Community Centre.

An online information session will also be held on Monday, 28 June, from 4-5pm on the NSW Roads Facebook page.

Community consultation closes on Monday, 5 July, with all feedback to be considered by Transport for NSW.

Check out the most frequently asked questions here: bit.ly/3pqD9z3 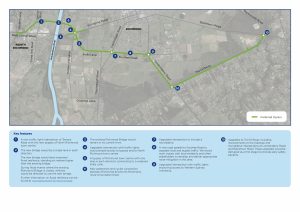 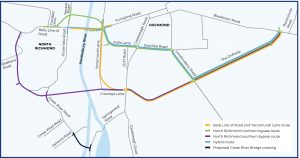