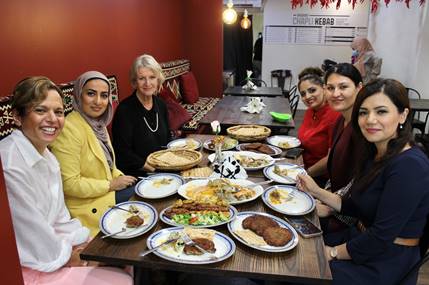 SBS, which operates TV, radio and online services, is majority-funded by the federal government.

Lobbying to have it here in the west is part of Labor’s push to invest in cultural infrastructure so community organisations have space to operate effectively and efficiently within their multicultural demographic.

Grassroots organisations here would really benefit from this investment, said the Greenway MP.

“SBS is already focused on providing diverse, quality programming, for multicultural Australia and the creation of community space alongside their headquarters has the potential to foster and strengthen community diversity, and provide organisations like Afghan Women on the Move with the spaces to meet, run their operations and create content,” Ms Rowland said.

“It has been estimated that building a new SBS HQ in Western Sydney would create almost 400 construction jobs and generate $85 million for the Sydney economy.

“Should a Labor Government be elected, we look forward to commissioning a feasibility study into the relocation of the SBS to Western Sydney, alongside the provision of a multi-purpose space for public use.”

What Afghan Women on the Move are saying about the proposal:

Maryam Zahid – Founder and managing director AWOTM:
I acknowledge the importance of media, visual visibility and spaces, safe spaces, especially if you’re a grassroots organisation like ours and if you’re an emerging community, if you’re new in a community.

For a lot of newly arrived communities, their first approach, or the first point of contact will be mostly churches, synagogues, or temples. But I think, to be able to integrate a much wider community, we need to get out and find other places to also practice things that may not be supported from the cultural perspectives that we were practicing back home.

Because AWOTM started from social media, we have no space to function. So it took us five years to make sure that we work with the community and the community work with us. We built that trust, and it showed the importance of being given a safe space.

Now we have been lucky to find a room from Blacktown Council, which we are very thankful for. But you can’t just work through social media in Zoom meetings, if you really want to bring the change. So I think that’s how I see the importance of having a space created through the relocation of SBS — to provide these community spaces, alongside the multicultural broadcaster, for organisations like ours in Western Sydney.

Anthea Green – Operations manager AWOTM:
Look, I think this community organisation started, I think in Maryam’s home with a computer. It provided on social media a safe platform to grow and develop for Afghan women particularly, and for the Afghan community as a whole.

As an organisation grows it needs a space. The Afghan community needs a space to meet in, but then your safe space, a space that’s not aligned to anything in particular, other than their own community.

I think if SBS gets to western Sydney, that’s a wonderful opportunity to create a space alongside it, for all these organisations that are based in cultural and community groups to have facilities that they can use to produce content and media for themselves, that supports what they’re trying to do without costing them a whole heap of money. I think it’s a great support for local communities.