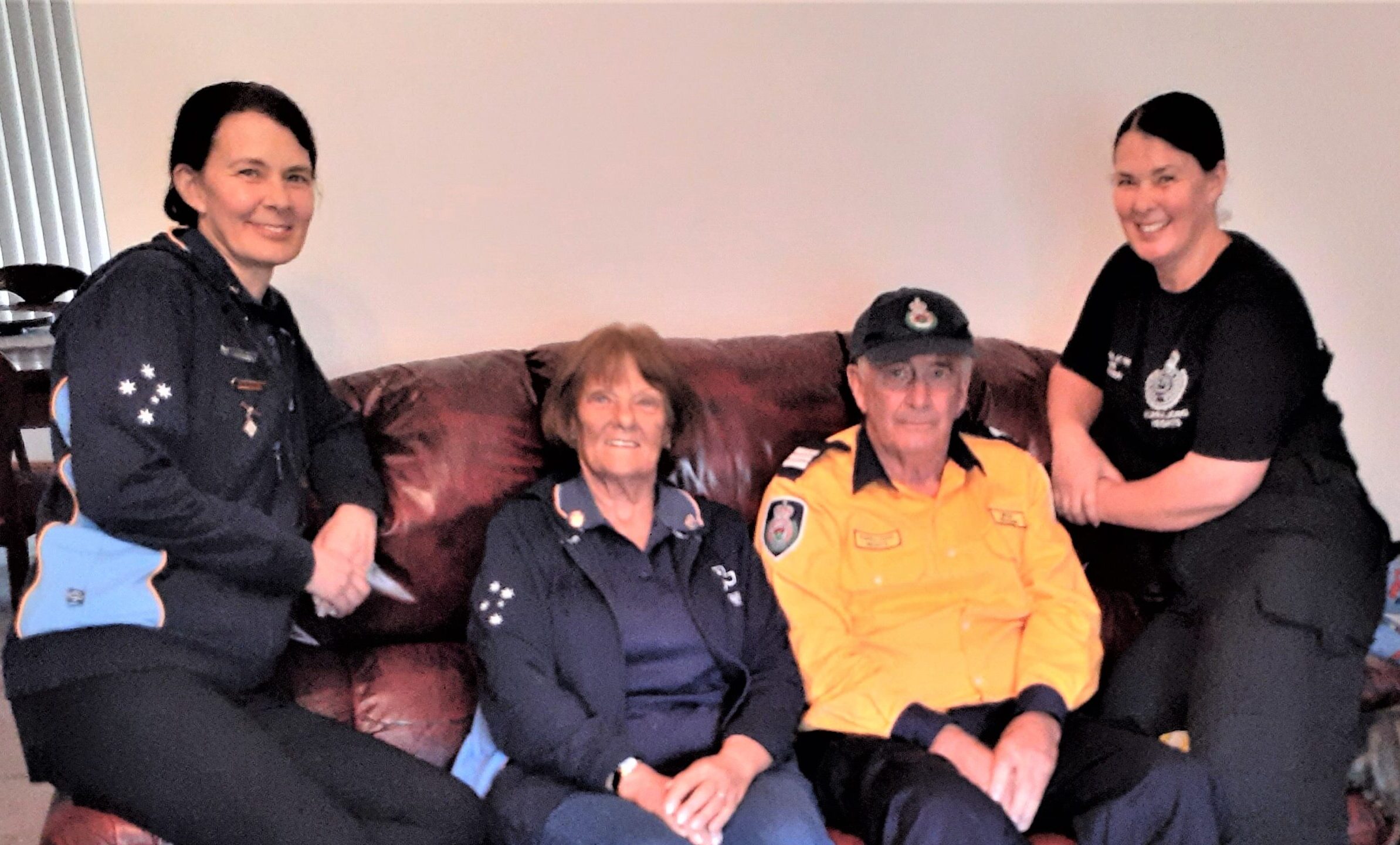 Halfway through my interview with the Williams family – parents, Brian and Diane and their twin daughters, Justine and Kylee – I had to put a hold on the questions.

“Will you excuse me while I ring Julie Ryan, our publisher, to request another two pages for this story,” I quipped.

“I don’t know how I am going to fit the Williams clan feature onto the two pages we normally allocate!”

My pen was working overtime as my notes spread across the pages as I weaned information about this remarkable and admirable family!

Crikey, where to start?

Between them, the Fab Four have served Kurrajong Heights RFS for a combined 170 years.

Brian, who “lent a hand” to the brigade as teenager, has been an official member of the brigade for 54 years, the last 37 as highly respected captain.

He has held a multitude of titles including Group Leader, Incident Controller, Divisional Commander, Prescribed Burn Supervisor and member of the National Fire Experts Group.

In 2011, the revered – yes, revered – firefighter was the team leader of the Hawkesbury Remote Area Firefighting Team (RAFT), the first of the new squads to be introduced into the NSW RFS firefighting armoury.

RAFT personnel are specialist members who are particularly effective for work in rugged, isolated areas that firefighting tankers can’t access by road.

They can then be transported in 4WDs before hiking to the fireground, or sometimes winched in by helicopter.

Brian’s bushcraft and knowledge of the Australian bush terrain has been instrumental in finding lost children – he knows the area like the back of his hand.

Such has been his devotion and service to his community, Brian has had the rare honour of been recognised by Rotary International by being awarded a Paul Harris Fellowship, the highest honour bestowed on an individual for his contribution to his or her community.

Diane joined the brigade four years after her husband while Kylee and Justine became members at 16 and next month will be proud recipients of 30-Year NSW RFS Service Awards.

Diane has been a guiding light for the Girl Guides movement for 43 years since accepting a request to join the First Kurrajong Brownie Guide unit as an assistant leader in May, 1978.

Down the years she has served the movement as a Tawny Owl, Brownie Owl and Girl Guide Leader, served on numerous State, Regional, Divisional and District committees.

This inspirational woman has an abiding love for guides and there is nothing she won’t take on to inspire and aid members of the movement.

“Guides has brought so much joy into my life,” Diane said.

“I have had so many wonderful experiences, met and mentored many amazing girls and their parents, grandparents and siblings and count my blessings that Mrs Barbara Jones, Kylee and Justine’s kindergarten teacher, asked me those many years ago to help out and become a guide leader.”

Diane had little trouble roping her family into the world of guides – the twins joining while they were in kindergarten with Justine also rising to Guide Leader and Kylee, a computer wiz, does all the artwork for certificates, flyers and “whatever else is needed”.

The Williams’ long association with guides continues with Justine’s 11-year-old daughter, Kiah, sharing her mother, aunt and grandmother’s passion for the movement.

Kiah’s brother, 8-year-old Cameron, at the moment, shows no interest in the scouting movement, preferring swimming as his pastime.

Brian couldn’t escape the Guide “noose” – a deft hand with hammer, nail and a hunka wood, he is always ready, willing and able to do any repairs to the guide hall in Mill Road.

Back to the twins!

Kylee worked in the Emergency and Cardiac Care areas for 25 years before using her remarkable computer and business skills and entering the investment business.

Justine’s long career in nursing continues at Richmond’s St John of God Hospital where she is a theatre nurse – during her long career she also worked in emergency, Cardiac Cath Lab and also lectured at her old nursing alma mater.

The twins also nursed a passion for grass skiing after Brian and Diane opened the Kurrajong Heights Grass Ski complex in 1980 which they operated until selling after retiring in 2003.

Justine won a World Junior title in Italy as well as the senior crown at a Japanese Senior championship and Kylee was on the top dais at a Pan Pacific Championships in Taiwan.

Justine and Kylee contested the 1987 World Championships in Austria where they did their parents and country proud, finishing fifth and sixth respectively against the best grass skiers on the planet.

I naturally asked them how they met.

“I lived at Tennyson and one day I was leaning over the fence and this car went past with this, what I thought was a very handsome young man, at the wheel.” She explained.

“I think it was a Tuesday so the next Tuesday, I stood at the same spot at the same time and waved to the driver when he went past – I did the same for the next five or six weeks and each time the car went past it was a bit slower the young man also returned my wave.

“He finally pulled over the following week and we had a good, old chat and he explained that each week he drove from his home in Kurrajong over to visit a mate in Wilberforce , hence his regular passing of our home,” Diane explained.

“Brian then asked me out to a picnic at the Grose River with friends – we were married two years later!”

Such is her modesty, it wasn’t until I had rubbed writer’s cramp out of my hands that Diane’s proud family revealed that she was anointed Citizen of the Year at the 2022 Hawkesbury Australia Day Awards.

If there’s a Family Award next year, as sure as eggs is eggs, the Williams clan will be laydown misères to make the acceptance speech.

Needless to write but meeting this inspirational family and being given the opportunity to tell (part of) their story, made my day.

Main picture: Couch potatoes they ain’t! Diane and Brian Williams with their pride and joy, twin sisters, Justine (l) and Kylee. The family have all devoted their lives to improving the lot of their fellow citizens. 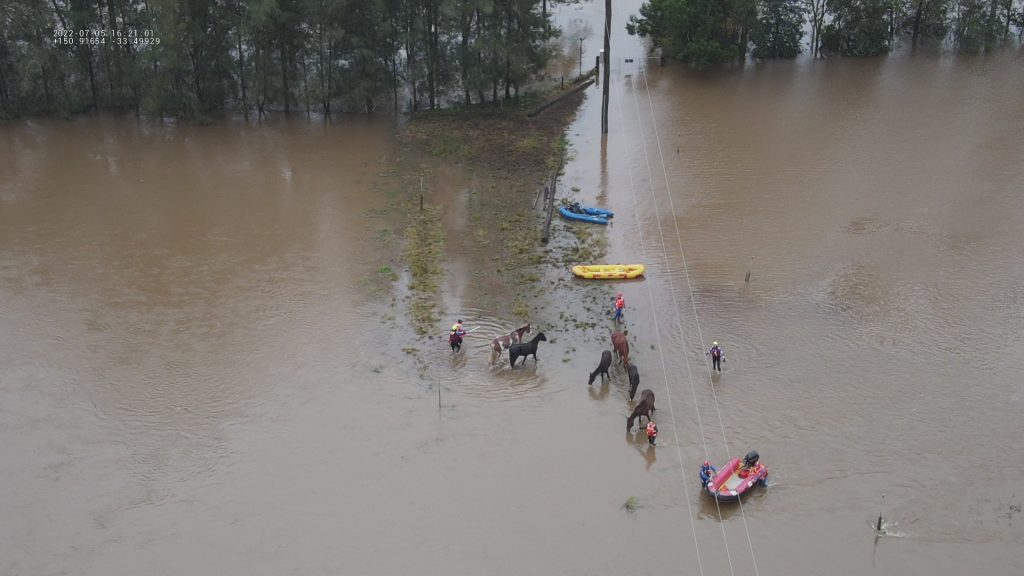